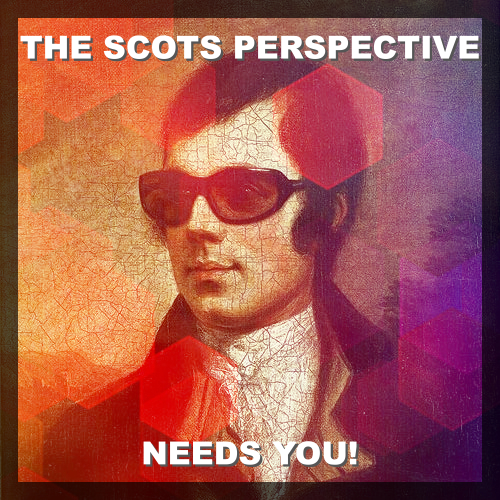 The Scots Perspective was set up as a grassroots new media platform to allow normal people to become the media and air all sorts of political views, cover all sorts of culture that is often overlooked by the mainstream media and generally become a soapbox for the view of Scots and the Scots diaspora.

To do that properly, we need more contributors. We need you.

So, if you’re passionate about politics, music, computer games, sports, philosophy, history or anything at all and you want to write about it, please get in touch with us at scotsperspective@gmail.com and get involved.

It’s one week until we launch and there is rarely a better time to nail your colours to the mast with a mission statement!

“Over the past few years there has been an explosion of new media in Scotland, although most of it has concentrated solely on politics and has been possessed of a specifically pro-independence editorial slant.

We believe that Scotland is about more than politics and within the political sphere, a media source should be open to representing a range of viewpoints so as to foster rational debate rather than creating a closed ideology echo chamber.

This is the Scots Perspective, what’s your view?”

We’re always looking to build our roster of contributors, the best to reflect the range and depth of Scotland’s viewpoints.

The Scots Perspective is a truly independent new media platform intended to celebrate Scotland, its people, its culture, its diversity and its character while also promoting reasoned and balanced debate of its politics.

We’re keen to build a roster of contributors who can provide compelling articles on all of the above and help us to inspire, inform and involve the people of Scotland.